At Maguires Country Parks, we know that when it comes to Christmas, we all have a favourite Christmas film that we watch over and over each year (and a few we will argue aren’t worth the time…)

That’s why we conducted a survey on social media to discover what the nation’s favourite Christmas films are. Read on to see where your favourite ranks.

Which films ranked the lowest?

Starting with number 10, we saw The Red Shoes, followed by The Grinch at number 9. Despite being remade and animated in 2018, it seems this wasn’t enough for people to want to cosy up and watch Dr Seuss’ legendary character.

Next in at number 8 was Love Actually. With the heart-wrenching gifting of Joni Mitchell’s CD over a gold necklace, this isn’t a scene for the fainthearted. Have the tissues at the ready!

Home Alone took spot number 7, with 2, 3 AND 4, nowhere to be seen (we wonder why…) We have to agree, this film is an absolute classic, but do you agree with where it ranked?

In at number 6 was The Holiday. This 2006 Christmas film is a rollercoaster of emotions and exactly what you need during the festive break. Number 5 was Jack Frost which despite being well loved by the nation, generated icy reviews from critics.

As we near the top spot, it’s starting to get controversial! Elf ranked at number 4, a film that many would call their die-hard festive favourite. Funnily enough, Jack Black actually said Elf was his favourite Christmas film after forgetting he had played a role in The Holiday!

To be expected, Miracle on 34th Street nabbed one of the top spots at number 3, followed by A Christmas Carol at number 2. Whether it’s The Muppets or a comforting black and white classic, this Charles Dickens’ story is one of your festive favourites.

Taking the top spot was It’s a Wonderful Life. Released 74 years ago, it still easily manages to be one of the nation’s favourites each year. We will be shocked if you haven’t seen it already but if not, it’s a necessity for the festive period. The film was also dubbed the best Christmas film ever by Time Out this year – 100% the nation’s favourite! 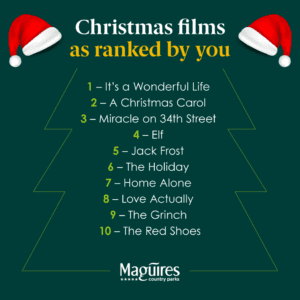 So, did your favourite make the ranks? Head over to our Facebook page and tell us if you would order these films differently!

If you wish you were cosying up watching films in your holiday home, get in touch with us about your own holiday home for 2021.

This website uses cookies to improve your experience while you navigate through the website. Out of these cookies, the cookies that are categorized as necessary are stored on your browser as they are essential for the working of basic functionalities of the website. We also use third-party cookies that help us analyze and understand how you use this website. These cookies will be stored in your browser only with your consent. You also have the option to opt-out of these cookies. But opting out of some of these cookies may have an effect on your browsing experience.
Necessary Always Enabled
Necessary cookies are absolutely essential for the website to function properly. This category only includes cookies that ensures basic functionalities and security features of the website. These cookies do not store any personal information.
Non-necessary
Any cookies that may not be particularly necessary for the website to function and is used specifically to collect user personal data via analytics, ads, other embedded contents are termed as non-necessary cookies. It is mandatory to procure user consent prior to running these cookies on your website.
SAVE & ACCEPT